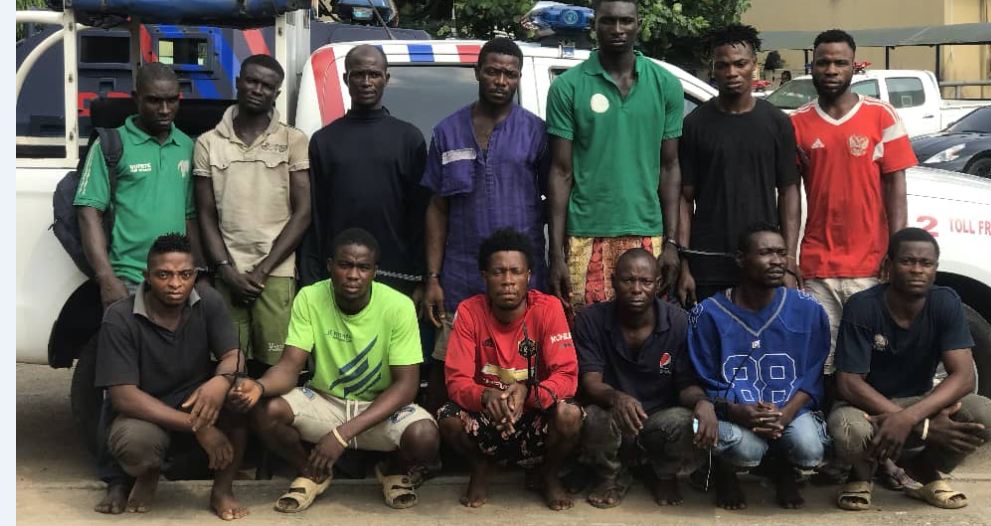 Thirteen suspected traffic robbers who specialize in attacking motorists trapped in traffic in different parts of Lagos were yesterday, arrested by operatives of the Rapid Response Squad , RRS.

Some of them were arrested in their hideouts around Motorways, Old Toll Gate and Olusosun Dumpsite , in the Ojota area of the state, while smoking Indian hemp, in preparation of an operation.

The Commander RRS, CSP Yinka Egbeyemi, disclosed the arrest while briefing the Commissioner of Police, CP Hakeem Odumosu during a meeting with policemen attached to the Squad and other operational units, organized by Odumosu.

Egbeyemi stated that some victims who were dispossessed of valuables and residents of the areas identified the suspects as those terrorizing motorists along the route.

The command boss who had deployed men of the RRS and other operational units to strategic places across the state to checkmate traffic robberies , said the war against it was total.

He emphasised on the need to adopt various anti crime strategies in combating the menace but was quick to add that such strategies must not jeopardise the security network of the state.

He therefore ordered that the suspects be transferred to the State Criminal Investigation and Intelligence Department , SCIID, Yaba for proper investigation and prosecution, assuring Lagosians of the command’s relentless efforts in eradicating traffic robbery and providing adequate security for all and sundry in the State.