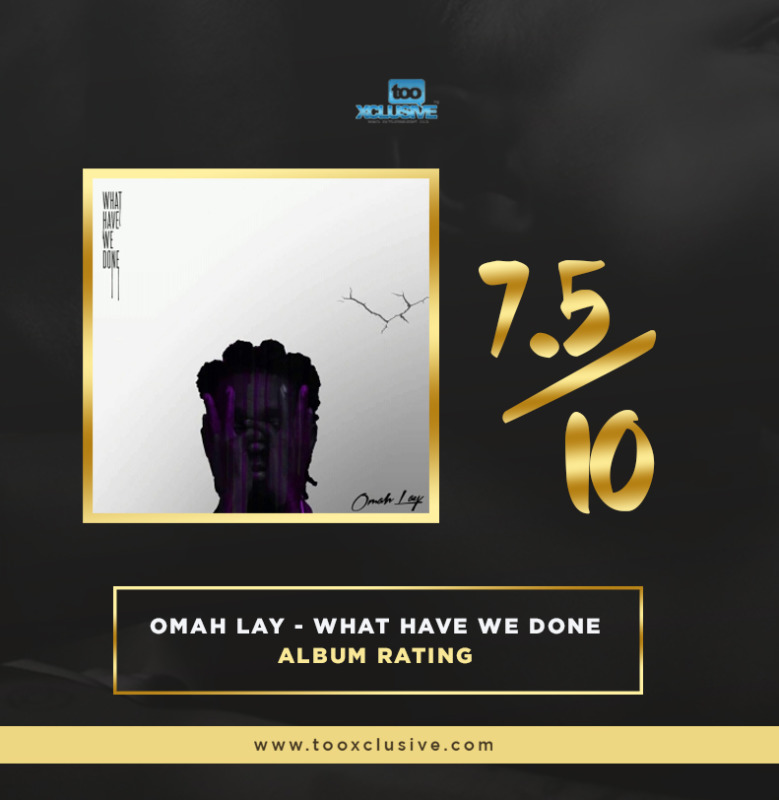 In the wake of the coronavirus pandemic, Stanley Omah Didia who seemed like a regular young lad from Port Harcourt with nothing for his passion and talent for music shut down the music scene with his hit singles “You” and “Bad Influence.” He later went on to release his critically acclaimed debut EP “Get Layd” which garnered over 120 million streams in 4 months and eventually became one of Africa’s fastest streamed EPs.

Moving forward, the singer released his second EP on the 2oth of November, 2o2o 6 months after the debut EP – “What Have We Done” which consists of 5 tracks that include a remix of “Damn” from the “Get Layd” EP. For Omah Lay, this project is his means of showing how he has grown as an artiste since making his debut. The project has production credits from Bizzouch, Echo The Guru, Omah Lay, Tempoe, and Tuzi, with mixing and mastering  done by Swaps.

“This time last year I was holed up in my tiny room singing my guts out, not knowing if people would ever hear or even appreciate these songs.Fast forward few months later, those songs came together to become an EP titled “Get Layd” and that shit changed my life!!! “ I see myself everywhere, hear myself everywhere feels great! Everything I ever wished for…

But with it went the simple things of life Man facepalming, I miss being Stanley!!! Got me asking myself sometimes WHAT HAVE WE DONE???!!! Don’t mind me, this shit is still new to me.I like to think that I have grown since the last time you heard from me and I’m sure you’d hear that from my music.”

Omah Lay WHAT HAVE WE DONE EP Review

While “Get Layd” saw the singer express his youthful desires ranging from being a bad boy to banging the woman of his dreams with raunchy lyrics and sweet melodies, “What Have We Done” gives another impression. The Port Harcourt bred singer is overwhelmed with the success of his debut EP and can only document his experiences in the best way he knows: music. The title “What Have We Done?” is actually a question to his fans, “What music monster have you created?”

The EP kicks off with “Ma Bebe,” which is a stunning fusion of Afrobeat and Reggae accompanied by adoring lyrics that would make any woman swoon. Omah Lay is full of promises and all he wants is to love his woman down low. “I wanna love you, love you, love you, love you, Love-love you down, down.”. This track would definitely sit well with the ladies.

He progresses to “Can’t Relate” where he reminisces on his journey to superstardom. He meditates on his new fame and how has been handling things so far. He also turns to God to help him get rid of his enemies/distractions in relatable lyrics. “delete every virus from my system and “never let your boy fall victim.” Hard guy, hard guy, small enemy, you turn prayer warrior.”

As the title suggests, Omah Lay reverences God on “Godly” and this is arguably the best track from this EP. He gives thanks to God for protecting him throughout his journey and aiding in fulfilling his dreams amidst all the drama and chaos of his new fame and lifestyle. “Man I thank God I Godly, say God no ungodly, Oluwa nai comfort me, when these people dey come bother me. This is why I jaiye sometimes, with a little Henny and ice, make I fit cool my mind, make I live this life…” he sings

At this point, it is clear that Omah Lay can not refrain from his bad boy lifestyle even if he tries hard. In “Confession, ” he switches back to the bad boy vibe as he confesses to a lady who appears to be oblivious to his charms. Tired of doing things the lover boy way, Omah Lay makes a staggering confession to her with wild lyrics and a honey-laced voice that one can’t resist.  “Damn” which features 6lack sounds absolutely stunning but sadly it doesn’t beat the original track. Like dayum! Omah Lay could have put him on another song or better still, brought in another track.

On an ending note, “What Have We Done” changes the narrative that Omah Lay didn’t get lucky with his first EP because, in all honesty, the young man is absolutely talented. His debut EP was released during the coronavirus pandemic: a time people had no choice but to stay indoors and listen to music so many were of the opinion that people got bored and had no other choice than to listen to his project.

Well, this EP shuts the naysayers as it perfectly captures his amazing songwriting and vocal prowess. Every track is a different experience and it never gets boring hearing his voice all over again. However, the title is somewhat confusing and doesn’t really tally with the content of the tracks itself. The title would have been a perfect fit for a project with more tracks that flawlessly conveys the message he is trying to pass across. It’s a refined follow-up to his previous project and all we can wait for is for his debut album.

The Most Outstanding Track – ‘GODLY‘

The post Omah Lay ‘Get Layd’ EP Victory Was No Fluke, He Recreates Magic With “What Have We Done” – The Review appeared first on tooXclusive.

Olorunnipa’s appointment by Biden a sign that Kogites are exceptional —...