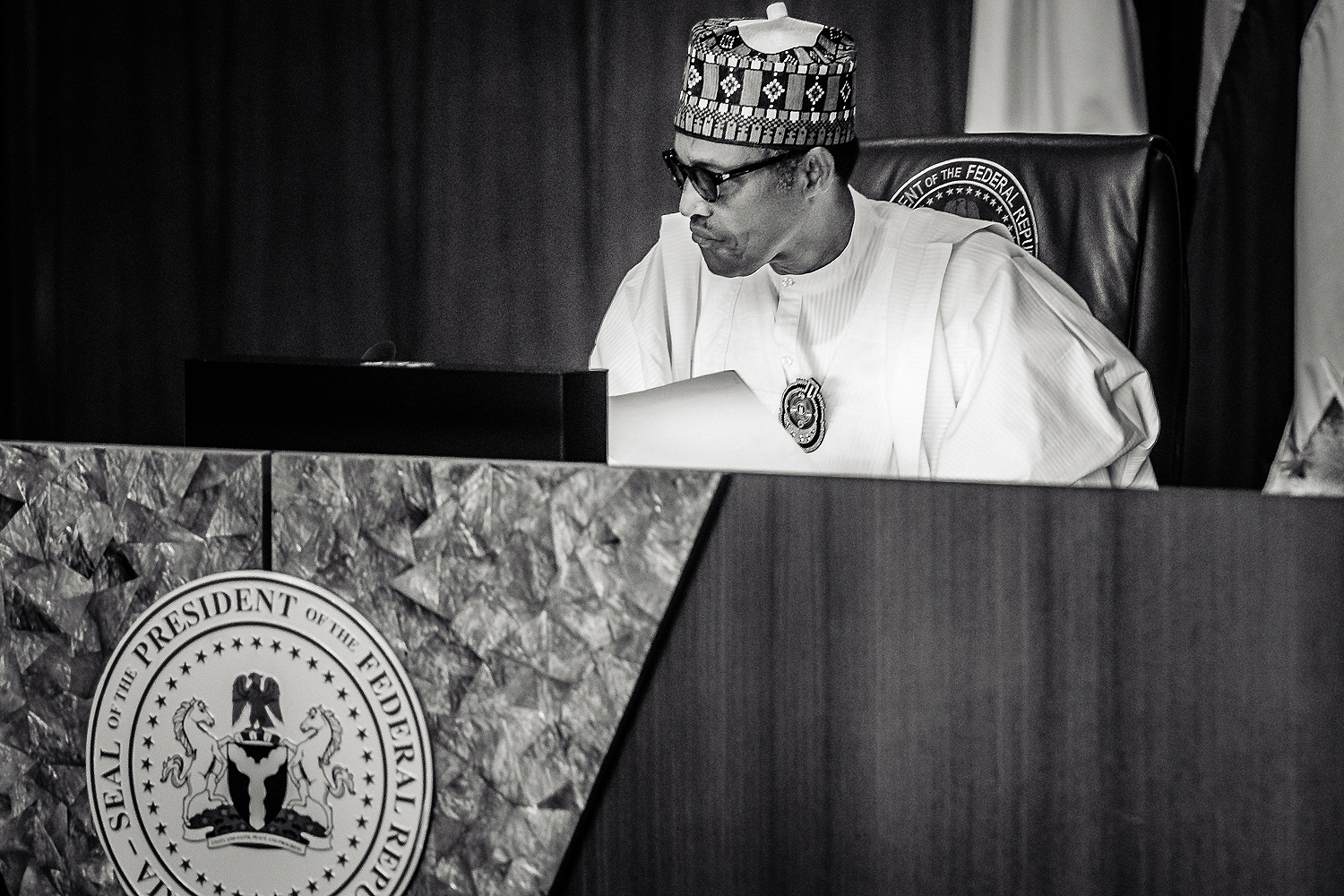 …Charges Govs to work with traditional rulers for local intelligence

PRESIDENT Muhammadu Buhari Tuesday, told 36 governors that the Federal Government was looking into reopening the nation’s borders as soon as possible.

President Buhari, who stated this in a meeting with the state governors on the issue of security, charged them to work more with traditional rulers and community members to improve local intelligence gathering that will aid the work of security agencies.

The President, who listened to presentations by a governor from each of the six geo-political zones on their specific security challenges, recalled that in the old order communities identified new comers and passed information to constituted authority.

According to him, “The sub-region is no longer safe, more so with the collapse of the former Libyan leader, Muammar Gaddafi’s regime and the cross border movement of weapons and criminals.

Giving an overview of the security situation in each of the zones, the President said his administration had done well in the North East and South South, adding that the South South situation was still worrisome.

He said, “Every day I get situation reports about illegal refineries and the blowing up of pipelines. You must stop local rogues from sabotaging oil installations.’’

Addressing the issue of banditry and kidnapping reported in each of the geo-political zones, President Buhari said “security is important and we must secure the whole country.

“We are thinking very hard on the issue of kidnapping. We will make it possible for the military to get to the bandits and kidnappers and eliminate them.’’

He explained that the closure of the nation’s land borders was partly an attempt to control the smuggling in of weapons and drugs.

“Now that the message has sunk in with our neighbours, we are looking into reopening the borders as soon as possible, ” he said.

President Buhari gave assurances that the country’s military will continue to get the support they needed to fight criminals.

He said, “I am not going to the public to speak about the vehicles and equipment we have ordered. What I can say is that the military received armoured cars and other equipment and they are training the trainers. More of such equipment, including military aircrafts will come in.’’

On the issues raised on EndSARS protest and its hijack by hoodlums to cause mayhem and destroy private and public property, President Buhari sounded a strong warning about reoccurrence, saying that no responsible government will allow that to happen.

“We do not stop anyone from demonstrating, but you don’t set up roadblocks and smash windscreens. Which government will allow that?’’

He noted that the foreign press coverage of the EndSARS violence was not balanced, citing specifically the CNN and BBC, for omitting the number of policemen killed, police stations that were razed, and the prisons that were thrown open for inmates to escape.

He said “I was disgusted by the coverage, which did not give attention to the policemen that were killed, the stations that were burnt, and prisons that were opened. (They said we are all at fault. We don’t have the sympathy of anyone. We are on our own).’’

President Buhari said violent demonstrations will no longer be allowed, adding: “democracy does not mean confusion or lack of accountability.’’

On the eight-month long strike by Academic Staff Union of Universities, the President said lecturers had not taken into consideration the larger challenges facing the country.

“Government conceded something. The problem is that they refused to look at the problem of the whole country.  The Minister of Labour is working hard at it. It is amazing how ASUU will stay out of classrooms for so long. There’s a need for our elites to understand the challenges facing the country.’