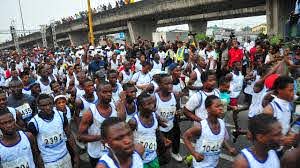 John who told journalists that it was a good race, said the weather in Kaduna was good and had made the race easier.

Meanwhile,the Kaduna State Government has expressed its gratitude to the runners, sponsors, citizens, media and government agencies that helped to successfully stage the first edition of the Kaduna Marathon.

A statement from Muyiwa Adekeye, Special Adviser to the Governor (Media & Communication),stated that the first edition of the Kaduna Marathon has advanced the stated goals of promoting sports, encouragingsocial interaction and showing the best of Kaduna.

“The Kaduna State Government wishes to express its gratitude to everyone that has helped to make a success of the first edition of the Kaduna Marathon. The elite runners from several African countries brought high standards of long-distance running while Nigerian citizens, residents and visitors alike to Kaduna participated with enthusiasm.

“KDSG commends the all the runners, the sponsors, the media and government agencies that collaborated to make the Kaduna Marathon a success at the first attempt. We congratulate the winners and acknowledge other participants for making it a joyful sporting and social event.

“The state government salutes Kaduna residents for the warm welcome they have given to our guests. Government acknowledges residents for kindly bearing the inconveniences caused by the road closures for some hours on race day.

“Today’s main 21km race and the 5km and 10km races have helped advance the goals set out for the Kaduna Marathon. Designed as a half-marathon, the Kaduna Marathon is designed as an annual sporting event, creating options for talent development, drawing mass participation, inviting visitors to the state and creating economic benefits. A major objective is to promote social interaction and advance unity in the state.

“KDSG welcomes the recognition by world athletics of Kaduna Marathon as a fixture on the international sporting calendar.

“The Kaduna Marathon represents a further initiative in reviving sports in Kaduna State. In 2019, Malam Nasir El-Rufai anchored this responsibility in a new Ministry of Sports Development. The government will continue to support sports and work to stage many more sports programmes in the near future.”

Killing of 43 farmers in Borno: I’ve given needed support to...