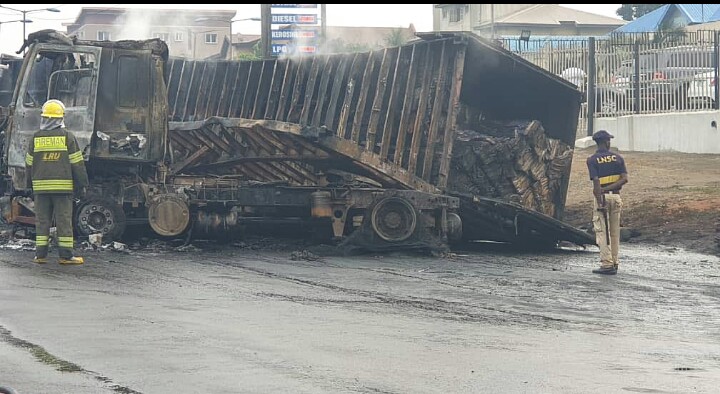 The Nigerian National Petroleum Corporation (NNPC) has commiserated with the Lagos State Government and victims of the tanker explosion which occurred on the Otedola Bridge in the early hours of Saturday, Oct. 17, 2020.
The Group Managing Director of NNPC, Malam Mele Kyari, in a statement signed by the Corporation’s Group General Manager, Group Public Affairs Division, Dr Kennie Obateru, said that he felt particularly sad about the reoccurrence of these events.
According to him, the incidents could have been avoided.

The News Agency of Nigeria (NAN) reports that the incident occurred when a container truck loaded with fabric experienced brake failure and collided with a 33,000 litres fuel tanker loaded with Premium motor spirit (PMS), belonging to a downstream operator.
Upon the crash, there was a fire outbreak which led to the explosion which was later extinguished by officers of the Lagos State Fire Service.
No fatality was, however, recorded in the in incidence.
Kyari admonished motorists and downstream operators to continue to ensure strict adherence to safety rules and regulations in order to avoid these unfortunate incidents that always lead to loss of lives and property.
Vanguard

Seeds Of Destiny Devotional – A Distraction Of Destiny

2020-10-24
Naijamerit is a News Website that Renders News Online from Valid news vendors. This is to enable us reach out to people via the internet that are in search of information for their self purposes.
Contact us: Naijamerit2@gmail.com
© Naijamerit 2020